Ender-3 is one of the most popular DIY 3d printers in the 3D printing industry. It is popular in the additive manufacturing industry at the moment of its coming out.

It has not only a low price but also an excellent printing effect. Shortly after that, its upgraded version, Ender-3 Pro upgrades with Meanwell power supply also met with you. It prints more safely and stably.

What are the specific differences between Ender-3 and Ender-3 pro? Here are some differences you wonder to know.

The Difference Between Creality Ender-3 and Ender-3 Pro

Creality Ender-3 is an open-sourced 3d printer for every community of users and contributors.

One of the important characteristics is its stability. V-Slot+precision pulley, Patented technology, running more smoothly, more wear-resistant. It can effectively reduce noise.

Except, the industrial-grade circuit board is quite mature, it can work continuously for 200 hours without pressure, also Ender-3 3d printer allows it to resume printing after power-off or lapse occurs and with thermal runaway protection itself. 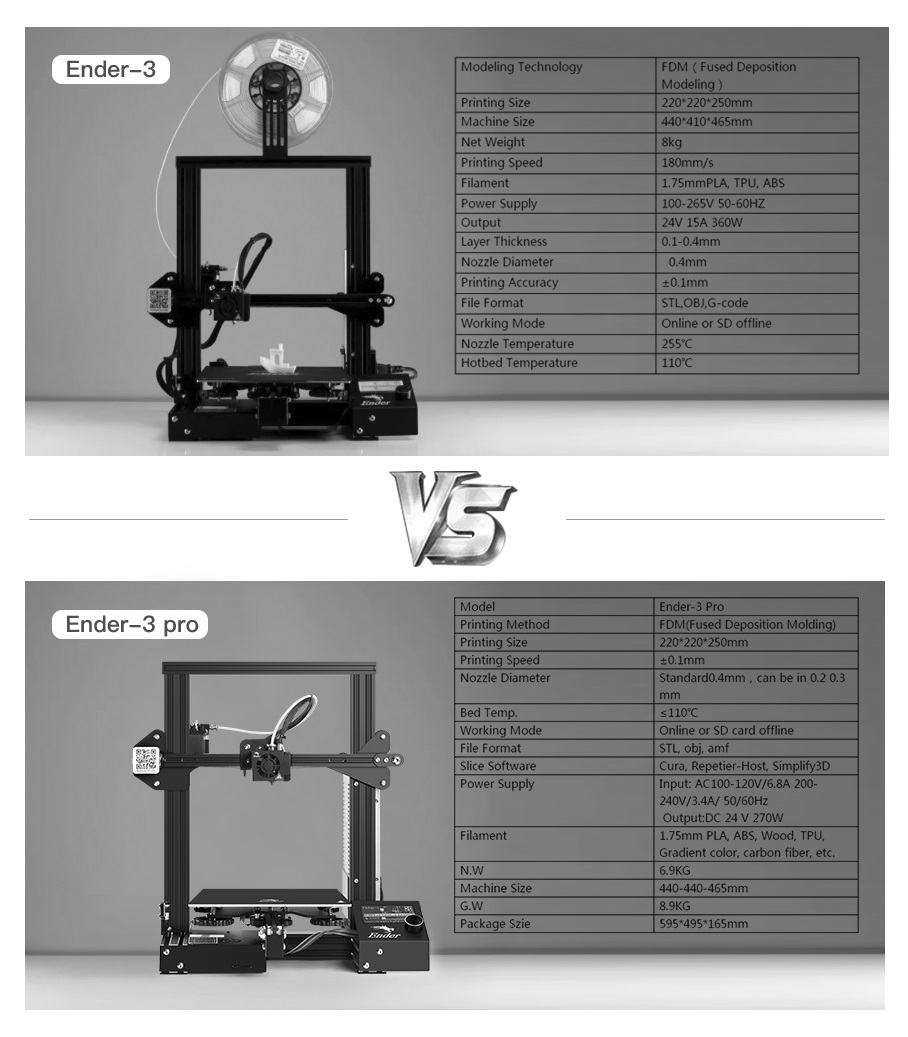 And it also adopts the MK8 extrusion mechanism, which is a brand-new patented infrastructure, effectively reduces the risk of plugging and poor spillage.

It also can print almost all filaments on the market. More importantly, the Ender-3 3d printer can reach 110℃ for hotbed in about 5 minutes, which satisfies the needs of fast heating and printing ABS.

And Creality Ender-3 Pro 3d printer is an upgraded version of Ender-3, together with the imported Meanwell power supply and new platform sticker, also redesigned the aluminum extrusion.

Upgraded components enable Creality Ender-3 Pro to print more safety and stability. there's a lot have been upgraded, below are the upgrades:

As we all know, Meanwell power supply is produced by the listed company over 30 years of experience in the power supply industry with mature technology. What’s more, it can also ensure safer and faster heating of all necessary components.

The printer is shielded by its power supply from voltage spikes and power outages. If electrical power is lost, prints can be resumed from the last layer, which saves time and reduces waste.

And Ender-3 3d printer only uses the ordinary power supply, which is not powerful and durable to compared the Meanwell power supply.

2. Aluminum extrusion
Redesigned with a much more sturdy, 40x40 aluminum extrusion for the Y-axis base of Ender-3 Pro. This provides unprecedented stability for the printing surface, resulting in upgraded print quality. And Ender-3 uses plastic extrusion.

The textured surface adheres to all types of filament better than traditional methods such as tape, glue, or hairspray. No more model warping on larger prints!

Once the model is finished printing, remove the magnetic upper from the lower and bend or flex the print surface to watch the model effortlessly pop off the printing surface. And Ender-3 3d printer has a normal platform.

Since these two 3d printers came into the market, they have received a variety of favorable comments, and everyone's experience is different. Here are some price differences and user experiences of these two machines, so that you can choose machines more easily.

After spending a couple of weeks tweaking and printing on the Creality Ender-3, our impression seemed to grow fonder the more time we spent with this 3D printer. The experience did include a few speed bumps along the way, but none of the issues we had were insurmountable.

All in all, the Creality Ender-3 is an extraordinary 3D printer when you take the sub-$200 price tag into consideration.”This is the review from the all3Dp. We can know that Ender 3 is the high quality and precision printer at a lower price.

For beginners or makers, the Ender 3 is a perfect choice on a budget. When this 3D printer does have its features, the affordability makes it a worthwhile investment. The high-quality 3D printing is the important point of Creality Ender 3 right out of the box. On top of that, the growing community surrounding this 3D printer has led to more and more upgrades.

The price is under $300. Compared to Creality Ender-3, it’s more expensive. However, compared to other same performance printers on the market, Ender-3 Pro has a higher cost performance.

So, how to make a choice between the cheaper Ender-3 and the improved Ender-3 Pro?

Reasons for the Creality Ender-3 3D Printer:
In fact, it depends on how familiar you are with the printer. If you are good at repairing or replacing parts of a printer, such as replacing fans, printing and installing modifications, even exchanging its build plate to a glass sheet.

You might be better to choose the Creality Ender-3. Because you can save $100 of spare parts. And you can modify the printer according to your preference. It becomes an Ender 3 that belongs to you only.

Back to Choose your 3D Printer